You are here: Home / I Went For My Brown Belt, And All I Got Was This Faixa Marrom

I Went For My Brown Belt, And All I Got Was This Faixa Marrom 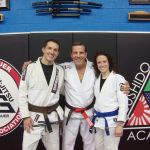 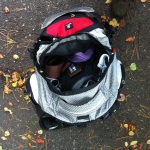 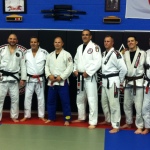 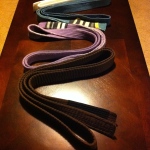 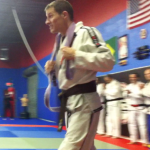 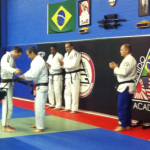 Last Friday, I received my brown belt in Gracie Jiu Jitsu from Professor Pedro Sauer. It was the first time I had ever tested for a belt, and the preparation and test itself were grueling, but very worth it!

I hadn’t tested before because I was a student of Royce’s until last year. Royce doesn’t do tests/ceremonies until Black Belt. Every advancement I’ve gotten has just been a casual instruction to change my decoration (however big a deal it was to me to receive). I never paid, tested, or knew when they were coming. I did come to like this method, and because of having been “raised” this way, I have a “funny feeling” about testing in jiu jitsu. However, my faith in Professor Sauer is such that I am happy to do as the Romans do.

The first part of my test for Professor Sauer involved a demonstration of the first 55, non-weapons self-defense moves out of Helio Gracie’s book. These were performed as they were called out by name. My uke for the day would attack using the move called, and I would defend. I did this simultaneously with the two black belts who were also testing that day. This was the part I knew was coming. I did each move twice, and they did each move once. I don’t know how closely I was watched, given the priority the other two likely took, but as I watch the video of this section, I’m very pleased with how I performed.

I didn’t know what else would be asked of me. I had heard that in other tests, Prof Sauer would tell students to get into a position and show him all they knew. This frightened me, and in order to prepare for it, I did a comedically extensive study of my own game, and memorization of lists of moves from everywhere. This was a powerfully insightful exercise, but “showing my moves” from positions was not ultimately asked of me.

As it turned out, the second half of the test involved each of us being given a partner, and having to spar positionally. We did top/bottom of mount, guard, side mount, and back. I think I did pretty well in this part, watching the video back. During this section, every second I didn’t progress felt like an eternity, so my memory was an iffy performance, but watching it back, it went well, and I caught one or two moves straight from the Sauer playbook while he was watching.

In the end, I do have a new respect for testing and for the “ceremony” approach. It was a huge, and humbling night to me, and an opportunity to have friends, training partners, teachers, and even my mother come watch. A great experience all around.

As it turns out, a crew was there filming that night. The whole video, with multiple camera angles, and a “reaction mic” on Professor Sauer, is here:

.
Posted in On Training