You are here: Home / Gracie Diet, Week 5: Getting Groceries Straight

Lisa and I are just beginning week five of eating according to the Gracie Diet.

The other night she told me she read something suggesting “easing into” full adherence. Oops. We unknowingly went “cold turkey” into it, though with no ill-effects.

Acquaintance With The Food Groups

Lisa is some kind of genius or something. Or I’m missing the Gracie Diet Memory Gene. Anyhow, it is a good thing she is around, and that we have the lists of the categories of food posted on our fridge for me to keep things straight.

I think I’ve been learning this diet like I do jiu jitsu. Very slowly, but instinctually as it settles in. In our case, routine is helping things become second nature. Throw a bunch of ingredients at me and test me, and I don’t know how I’d do, but because our approach included some routine, by design, I’m doing fine now.

Routine has come to us through some planning. I’m a big spreadsheet/planning kinda guy, so early on I set out to create a menu (to reduce meal-to-meal thinking), and deduce ingredients and a regular shopping list from that.

The spreadsheet I created to establish a menu, shopping list, and some routine to our transition

This would settle another concern I had going into the new diet, which was cost. As it turns out, we are BOTH saving money on this diet.

I calculated costs of groceries based on prices at two local grocery stores (Stop & Shop and Whole Foods Market). I considered shopping at both for the cheapest price on each item, but there is very little difference between our cheapest sourcing, and a trip to Whole Foods, so that’s the new Wednesday grocery trip.

Shopping once, weekly, is a huge part of why we’re saving money. With fewer trips to the store, there are fewer opportunities for “Hmm, let’s try this” moments. Between us, I think we used to hit the store at least 6 times per week, previously. Now just the once.

By the time the shopping list was figured out, and we got into this routine, which was around week 3, the novelty of preparing all of this new food at every meal was wearing off for me. My previous diet consisted completely of meals I could prepare and be eating in under 90 seconds.

The solution is still being worked out, but here is what I have so far.

On Wednesdays, after we grocery shop, we have a list of some foods to prepare for the week. (This is advised against in the Gracie Diet, but…) It includes the following: 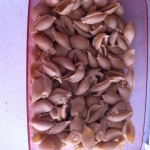 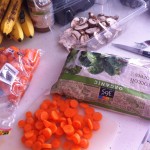 Now, trips to the kitchen can be made despite a rush, and a supremely healthy meal created in under 10 minutes. Those healthy meals could be:

…and with the Vitamix we purchased:

We also do veggie pizza once a week. Whole Foods has great whole wheat crust!

Now, I’m not a fat dude, but, a few weeks ago I was well over my desired weight class for the April New England Submissions-Only Challenge in which I’m competing, weighing 162 pounds. I’m now down to 152 pounds, and definitely not eating smaller meals. Lisa mentioned that she is also down.

In my life I’ve gone vegetarian, and later vegan cold turkey, tried a bit of working out vs none (the usual), done the Zone Diet, and a few other things, and never noticed a change in my energy level. On the Gracie Diet, I can’t claim that I feel a TON of energy I didn’t used to have (mid-day naps are still a necessity for survival whenever possible), but in the beginning I did feel a boost, especially when we were better about eating more smoothies.

Actually, I do remember a boost in energy after my first smoothie, I felt that I was “humming” with energy. Possibly my body was freaking out at what this “fruit” thing was. (Likely a fructose sugar rush.)

I’d like to get us into the habit of eating more smoothies (we’re down to 1 or 2 a week, instead of the 3-5 I’d like to drink, at least when “what I’d like to drink” is an abstract concept, not something that creates dishes to clean).

The most notable result is pride in my healthy choices, and also the unexpected savings in food shopping!

We’ve followed the diet very strictly. We didn’t stray for 4 weeks. We did notice, as a couple, however, that dining out was something we missed. We decided that rather than forsake our favorite restaurants and potlucks with friends, we’d allow ourselves “miscombinations” for those exceptions.

I can say that every exception has left me with a tummy ache. We’ll see if we even want exceptions after a while.

The next thing we need to add in is some more prowess in creating sauces, or combining spices to make things a bit tastier. Fruit is flavorful, but I mean the pasta, quinoa, veggies, stir fry, and even the lemon-less hummus we made. Experimentation will be the mother of that next step. Or maybe necessity.

Not Just An Experiment Anymore

All in all, we are feeling really good about the food we are eating. I have eaten out, and when I could’ve “miscombined,” I customized my order a bit, and it worked out just fine.

I feel so good about the healthier food I’m eating, and I know Lisa and I have had fun with this as a project, and, more and more, as a transformation.