You are here: Home / Where On This Chart Do You Spend Most Of Your Sparring Time?

Where On This Chart Do You Spend Most Of Your Sparring Time?

Think of your time in BJJ sparring is thought of in terms of when you’re safe, and when you’re in danger (with tapping being an irremovable piece of the game). This graph came in my head the other day, and I thought it useful: 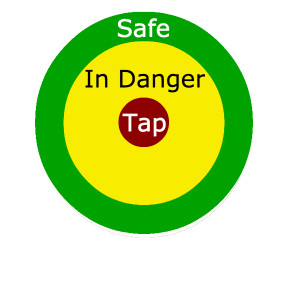 The Dartboard of Doom, or, The Pizza of Peril

Any beginner would agree, it’s hard to feel safe anywhere. They likely have almost no green area on their graph. As we progress, we begin to have the option to be safe, or allow ourselves to be in danger.

Over time, how deep in trouble we allow ourselves to get becomes a choice that integrally affects our game.

As a brown belt now, it is tempting to always work my new submissions and fancier sweeps on newer guys. To keep myself in dominant position, and work my top game, far from the perils of the triangle or back positions, or with a nearly extended arm.

At a cost to their own game, higher-level BJJ practitioners have the tempting option to “buffer” themselves from the tap, by steering things well inside the green.

Too much of this training “in the green” denies me the opportunity to shrink my “yellow” game. If I took it right to the edge all the time with increasingly better opponents, even (gasp) tapping sometimes, in order to master riding that crest, I’d actually turn my game into something more like this: 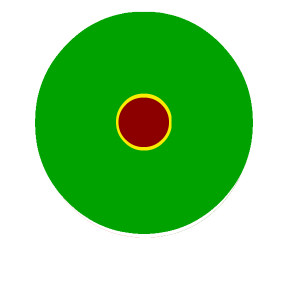 The high-level guys I train with, who surf that edge, routinely escape armbars at the last second, and find tiny nuances that disentangle or disable nearly-complete submissions. They’re pretty safe and in control seemingly everywhere. That’s an enviable game, earned after hard, pride-swallowing work to shrink their yellow game.

Where do you spend most of your time sparring?