For me, making tournament day very different from other days is like waking up in another life. It inevitably makes me uncomfortable physically and emotionally, like a visitor. Best, in my case, to make it just another day, and just another roll.

Nice then, that the morning of the tournament was notably unremarkable. 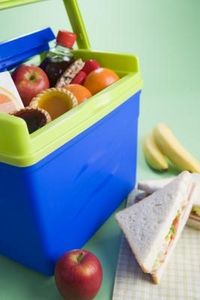 Lisa and I made an apple-banana smoothie, and packed it in a cooler along with some ice packs, water, carrots, and hummus. Any eating would likely be light, and would have to be easy on the stomach.

At NAGA last year, I waited all day (like, until 8pm) for my match, without eating. Finally, I caved and ate a Clif Bar. I was called to the mat mid-Clif. It wasn’t even through my esophagus yet when I hit the mat. I can’t blame it for a loss or anything, because I didn’t lose my first match, but it’s not something I want to happen again.

We ultimately didn’t need much of what we brought, only drinking about 12 ounces of smoothie each after our matches. I would definitely come prepared again, though. If we or a teammate had required ice, it would have been good to have, and a little extra food never hurts.

Lisa had no worries about weigh-in, as she was well inside her weight. I had seen a steady decrease in my weight since changing eating habits, but was still pretty close to 155.

As we checked in, and got in line to weigh in, I started to wonder if I’d made a mistake not worrying more about coming in under weight, and taking more measures to be sure I did (even skipping breakfast, or saving it until after weigh-in). I had weighed 155.1 a day or two prior, and, as I mentioned, not changed eating habits whatsoever.

When I was about to be called, I changed into gi pants, to ensure I was as light as I could be.

It was also a good thing I didn’t save breakfast until after weigh-ins, because my division was first up on the mat, only about 45 minutes later. Lisa and I were really happy, reading the order of divisions, that we wouldn’t be fighting at the same time, and could watch and videotape each others’ matches. 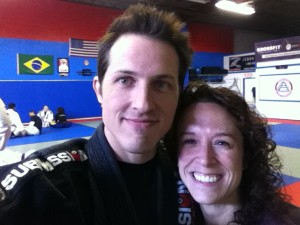 Waiting to compete, what came back to me in a flood, was the real value of the NE Sub Only tournament, which is its attendance by so many of my jiu jitsu friends from over the years, and across the state. It’s a rare and wonderful thing to be able to come together over our cherished hobby, and just catch up, compare notes, and commentate with friends during matches of our other friends, and strangers who impress us enough to warrant introductions, and the creation of new friendships.

The other thing that thankfully had very little time to come back (given my early position in the line-up) was nerves about the matches.

When you pay money to compete, and rearrage your schedule to accomodate it, and invite your friends, and compete in front of a crowd, there’s simply going to be more anticipation, even if you are committed as I am to the belief that outcome matters less than “stepping up,” doing your best, and stretching yourself out of your comfort zone.

It helped to know my first opponent, who has been an on-and-off regular training partner at Plus One. See our match here.