You are here: Home / The “Ridiculously Photogenic Jiu Jitsu Guy” Meme Is Bigger Than I Thought… 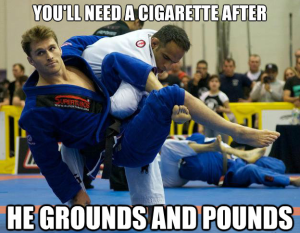 We aren’t big TV people, so this may be old news to some, but here is a clip of Clark Gracie (“Ridiculously Photogenic Jiu Jitsu Guy”) on Good Morning America. I did not realize this got this big!

I’m of two minds on this clearly total-crap interview.

My inner-cynic has a problem with the “I’m Too Sexy” interview in which Clark barely spoke (was only there to be ogled at), and newscasters for whom I’m supposed to have an ounce of respect fell all over themselves to find the most trite thing to say.

On the other hand, it gets the sport (BJJ, not just MMA) into the public consciousness, and millions of people might soon spell “jiu jitsu” correctly. Also, in a year in which they announced they were pulling wrestling from the Olympics, after its place there since 708 BC, I like to see growth in mano-a-mano martial combat sports wherever possible.

However low-brow, there is some titillation to seeing this passion of mine get some attention. It’s not unlike when I felt a little more proud to be vegan when the Simpsons mocked it.

I guess I feel goofily proud of my kid for getting in the paper, even though it’s a puff piece.

Here are the memes. They’re funny, I’m not gonna lie.